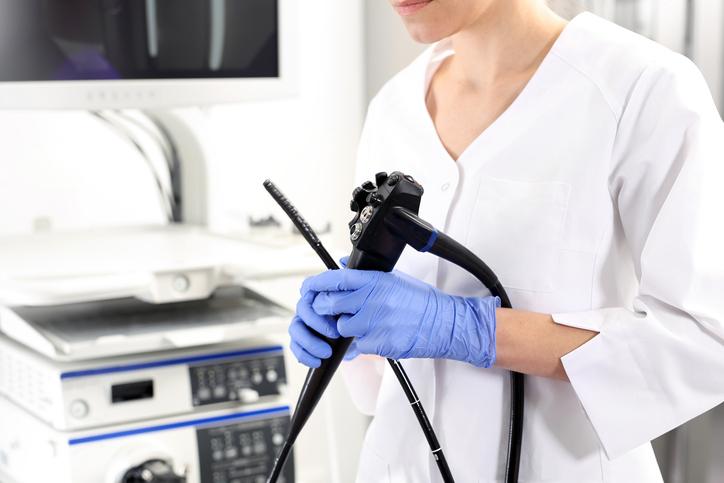 Gastroscopy (Esophagogastroduodenoscopy or EDG) is a diagnostic endoscopic procedure of the upper part of the gastrointestinal tract (esophagus, stomach, and duodenum) using an endoscope – a flexible instrument which enables the doctor to examine the interior of a hollow organ. Modern endoscopes include a digital camera mounted on the tip of the device, providing live wide-angle full-color imaging for analysis and recording. When needed, the endoscope can also be equipped with biopsy forceps and snares, enabling the doctor to collect samples used in histopathological examination or Helicobacter pylori tests (urease test). Both the examination and sample collection procedures are completely painless. The gagging reflex sometimes occurring during the procedure can be typically controlled by deep, slow nasal breathing.

Gastroscopy allows for an accurate assessment of the condition of the mucous membrane in the upper gastrointestinal tract. The examination includes the assessment of the elasticity and mobility of the esophagus, stomach, duodenum walls, and mucosal folds; the condition of blood vessels; peristalsis activity; and a careful evaluation of the contents and quantity of the stomach liquid.

Diagnostic gastroscopy is a safe medical procedure and can be performed in hospitals and outpatient units alike. The most common cause for performing this procedure is to diagnose the gastrointestinal tract for possible disorders, including:

When to have gastroscopy?

Gastroscopy can be advised in many cases. The examination should be performed in all patients over 45 and suffering from pain in the abdomen. In younger patients the examination should be performed in order to verify doctor’s diagnosis or in the cases when alarming symptoms occur (weight loss, anemia, difficulty swallowing, possible bleeding in the gastrointestinal tract – vomiting blood or vomit resembling coffee grounds, blood in the stool or coffee-grounds-type stool).

We offer screening and control examinations for patients who are at an increased risk of developing cancer (people suffering from prolonged gastroesophageal reflux disease, Barrett’s esophagus, pernicious anemia in atrophic gastritis, or earlier gastrectomy). In the cases where a peptic ulcer has been identified a Helicobacter pylori tests (urease test) is advised, with the post-eradication screening occurring no sooner than four weeks after the antibiotic therapy.

Gastroscopy is a safe, painless, and short (usually several minutes) examination procedure, putting little to no strain on the patient.
However, several contraindications exist, including:

Pregnancy is not a contraindication to gastroscopy, but the need for the procedure should be considered carefully.

If the test is to be made ​​before 14.00, the patient should fast before arriving to the Office; if it is schedule after 14.00, the patient can eat a light meal, such as yogurt + a slice of bread and tea no later than 6 hours before the test.

Gastroscopy is performed by an experienced physician with the assistance of a nurse.

In order to increase the comfort during the examination procedure one of four types of anesthesia can be used:

The patient lies on his/her left side, with the upper body slightly elevated. Dentures should be removed before the test. A plastic mouthpiece is applied in order to protect the teeth and gums. The patient is instructed to move the tongue forward, while the doctor inserts the dip of the gastroscope and asks the patient to swallow in order to help move the tube along. Guided by the live image coming from the endoscope, the device is slowly moved through the esophagus into the stomach and duodenum.

Similar to colonoscopy, sigmoidoscopy is an endoscopic examination of the colon. The principle behind the test remains the same, with the difference lying in the assessment of the intestine (usually the left side of the colon is examined). Accordingly, the duration of the test is shorter, and it is normally possible to prepare the patient by performing two enemas – one in the evening before sigmoidoscopy and one in the morning before the procedure. Sometimes it is necessary to use laxatives, comparable to those used in colonoscopy. The medical practitioner determines the exact preparation approach.

Colonoscopy is the endoscopic examination of the lower gastrointestinal tract (large intestine) with an endoscope – a flexible instrument which enables the doctor to examine the interior of a hollow organ. In the case of colonoscopy the endoscope is referred to as a colonoscope. The flexible device is inserted through the anus and moved slowly through the rectum into the colon. If necessary, it is also possible to examine the final section of the small intestine (terminal ileum). Modern colonoscopes include a digital camera mounted on the tip of the device, providing live wide-angle full-color imaging for analysis and recording. When needed, the device can also be equipped with biopsy forceps and snares, enabling the doctor to collect samples used in histopatological examination. The sample collection procedure is completely painless.

Colonoscopy is usually well tolerated by patients. The examination may be accompanied by a feeling of bloating in the abdomen. There may be a stronger short-term pain during the cornering of the intestine by the colonoscope. During the procedure, the patient lies on his/her left side first, and is later asked by the doctor to change the position. The doctor slowly inserts the colonoscope into the bowel, leading it to the final section of the colon or – when needed – the small intestine, and then proceeds to withdraw the device, carefully evaluating the appearance and shape of the colon and looking for any abnormalities. The test duration varies depending on the anatomical conditions, patient’s response and abnormalities discovered. On average, it takes 15 to 30 minutes.

The aims of the examination include:

The indications for colonoscopy include:

Polyp is any an abnormal growth of tissue projecting from a mucous membrane. Colon polyps can be of malignant and non-malignant type, appearing in clusters or individually. The most common type of polyp present in adult patients is the neoplastic type (adenoma). The probability of a malignant growth depends on the type and size of the adenoma (tubular, tubulovillous, villous). When smaller they seldom turn malignant, however polyps over 2cm in size possess almost 50% probability of becoming malignant. The type of polyp is always determined by the histopathologist. Adenomas of the colon can occur at any age, but a marked increase in the incidence appears in patients over 30. The most common location - in the rectum and sigmoid colon. Polyps and also sometimes well-developed colon tumors usually do not give any problems, and thus are harder to detect. If, however, there are problems (as described above), which may suggest colon changes, it is better to perform a colonoscopy examination rather than ignore early warning signs. All polyps below 10 mm in diameter can and should be removed during outpatient diagnostic tests and examined by a histopathologist, assessing the type of polyp and possible severity of the tumor. Endoscopic removal of polyps is a painless procedure.

several products intended for preparing before colonoscopy are available on the market. Our experience shows that the most effective one is FORTRANS.

Taking medication while preparing for colonoscopy:

Colonoscopy is performed by an experienced physician with the assistance of a nurse.

In order to increase the comfort during the examination procedure one of four types of anesthesia can be used: